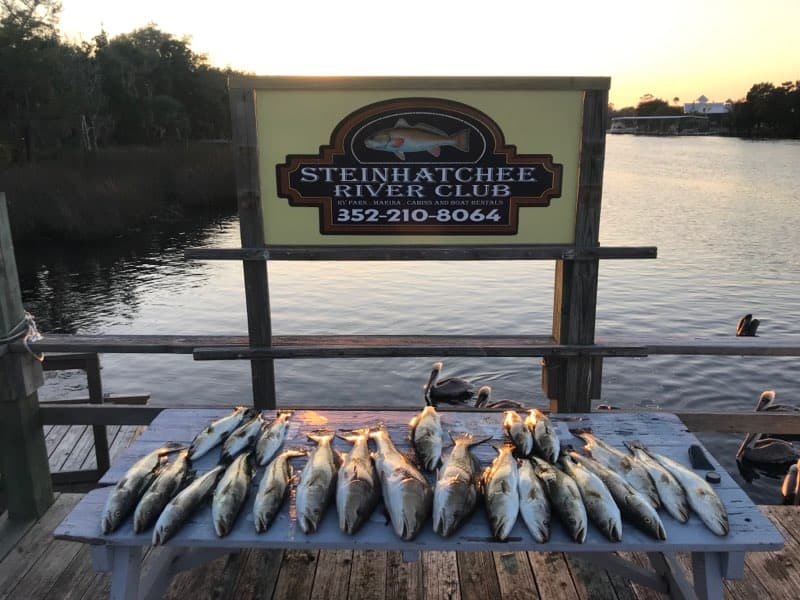 The fall weather and fishing hasn’t brought any real surprises this year.  We have had mild but cool temperatures pretty much right on schedule as things should be. In November the White Pelicans have shown up and they are a magnificent sight to see. Another Winter time favorite fowl of mine is the Loon which has made an appearance already as well. What a lovely sound when you hear this majestic bird’s amazing call early in the morning  just as the sun is rising and a little fog floats around above the water’s surface. Words just can’t do justice to the visual and audible mixture of stimuli this produces in your brain. If that doesn’t make you just go ooohhh and aaahhh every time, then maybe being out in nature just isn’t for you. The trout and redfish bite has pretty well lived up to what we expect and look forward to each year during this time. But fall will soon fall to the wayside as Old Man winter nudges his way in this month.  The days are getting shorter and the nights are bringing just a bit cooler temperatures with them. Just around the corner, December 21st  will be the annual Winter Solstice which brings us the shortest day of the year and marks the beginning of winter. Gradually the temperatures of our gulf waters are dropping down and this sets the stage for what is going to come. December will be a month of change and transition in patterns. But don’t despair and put away your tackle boxes and rods because it also delivers us some of the greatest fishing of the year.

December is a month here in Steinhatchee where we see water temperatures on the shallow grass flats drop down to a point where they are colder than the waters flowing through our river and abundant creeks. In these places the fish will seek the warmer waters and find a home for the winter where the temperatures are a bit more comfortable. Not only are the conditions more tolerable in the confines of the river and creeks but here the fish will also find food sources which are seeking more favorable conditions as well. This month as temperatures rise and fall we will see a game of musical chairs play out. When the fish make a move to the creeks and river it isn’t exactly a mass exodus from the shallow flats but a few will move and then a few more and finally the stubborn hardheaded ones will make their way along and join in. Then several warm days will come along and a few fish will migrate back out again until the weather stabilizes and water temps reach a point where a few warm days just aren’t enough to change things.

For many years now the winter time fishing in the creeks and river here has been a not so well kept secret. Once the word is out that there has been a migration of fish to these areas you can expect it to look like the Walmart parking lot during Christmas shopping season. Boats will thoroughly cover the waters and it can be a bit crowded at times in the confines of such small areas. Please be courteous to others during this time and try not to crowd or cut off your fellow fishermen. There are plenty of areas that will be holding fish so take time to do a little searching and not just pile in where you see a crowd of boats. There are many popular areas that will be holding fish and fishermen, such as Dallus Creek to the north, and many popular holes in the river, such as the suicide hole. But the river holds plenty of other secrets if you take some time and search. One way to locate fish is to slowly troll a Mirrolure until you catch a fish then circle back to work the area more thoroughly. More than likely you will find plenty more fish in that area. You can cast the same bait used for trolling or switch over to a Assassin Sea Shad on a 1/16 oz jighead to slowly probe the rocky holes and ledges. A jighead baited with a shrimp is also a very good choice as well. Go ahead and plan on stocking up on jigheads and Mirrolures before taking your trip. These limestone rocky bottoms are covered with cracks and crevices in which you will lose plenty of bait. It’s not a matter of if you will lose a lure but more a matter of when. A fortune has been spent on Mirrolures and jigheads which now have a permanent home at the bottom of the river. It can be a bit frustrating and costly at times but the reward usually outweighs the cost.

During the month of December we will see negative low tides as well. When these occur during the early morning hours it allows the ground of the shallow flats to be warmed by the sun. As the tides roll back in these areas will be much warmer than the surrounding areas. Look for areas near the mouth of the river and near creek mouths, especially those with rocky or mud flats. Trout and Redfish will move into these warmer areas and feed. This is a prime time for a suspending bait such as Unfair Lures Rip n Slash or a bulky softbait such as Saltwater Assassins Salty Snack. Cast these baits out and slowly retrieve with a very small occasional twitch followed by a pause. During this pause is when the strike will normally occur. Very often the strike will only feel like a slight tick or just a mushy feeling. At that point it is time to set the hook.

Thank you for taking time to read this and I wish each of you wonderful fishing this month and a Merry Christmas to you and your families. Enjoy the time with your families and don’t forget about the reason for the season. Be careful as you ring in the New Year and I hope to see you in 2020.

Take care, God Bless and hope to see you soon in the Hatch.